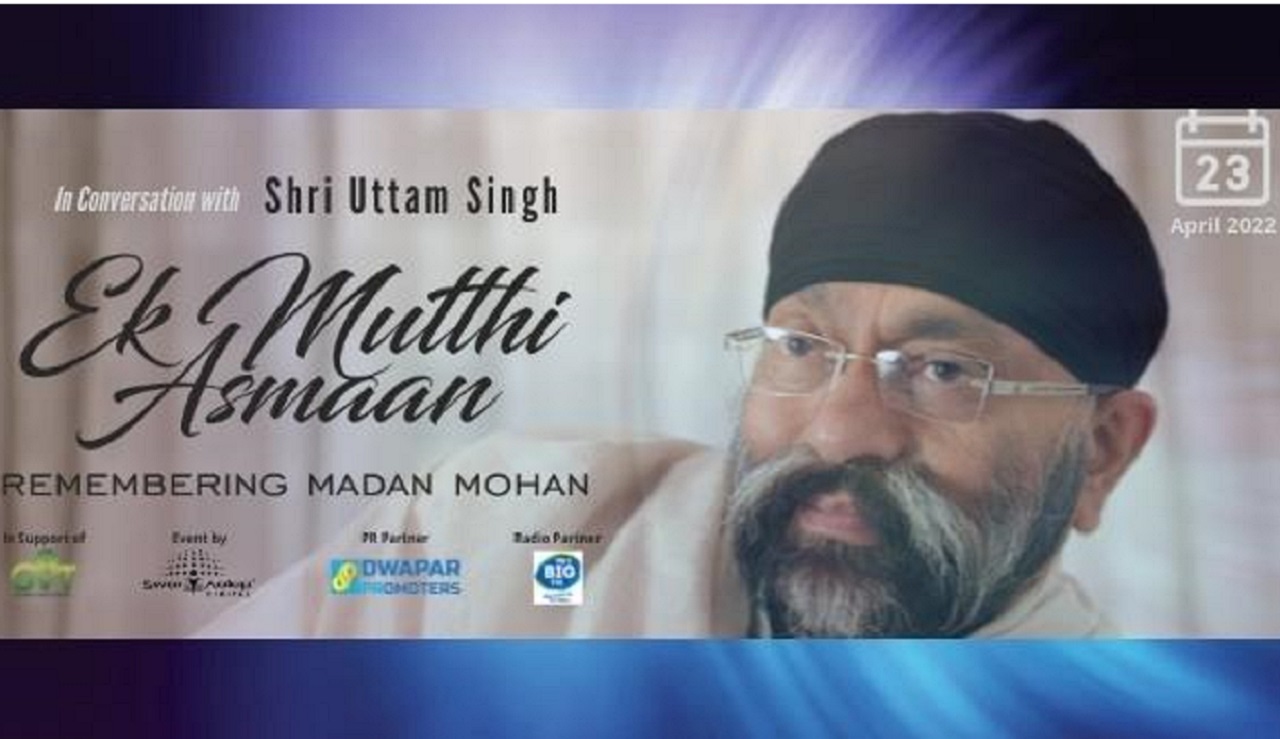 “Artists come and go, but legends never die”. I think we always look up to legends and people who not only win but give us a larger-than-life role models. Today, we have featured one such musical stalwart a legendary Music Composer Madan Mohan, whose music has immortalized him.

Art, at its best, is God in all His glory. Madan Mohanji’s compositions are acclaimed to be the pinnacle of the golden era of Indian Film Music. Swar Aalap is organizing a fundraising Musical Evening in the memory of this legendary composer. Funds raised through this event will be used for the projects of Global Vikas Trust, which works for rural economic transformation goals with a focus on the rural economy, environment, and 360° development of our farmers & their family.

This Concert – “Ek Mutthi Asmaan,” is scheduled for the 23rd of April at Nehru Centre, Worli. It has been conceptualized by his son, Sameer Madan Mohan Kohli. The event is presented by VIP & Motilal Oswal in aid of Global Vikas Trust, supported by Aurum Ventures. The concert will be conducted by Legendary Music Arranger Uttam Singh, hosted by celebrity Anchor Manoj Muntashir and renowned artists Padma Shri Anup Jalota, Javed Ali, Bela Shende and more will be performing the evergreen songs of Madan Mohan. Highlights of the same are 25-piece orchestration, conducted by ace music director – Shri Uttam Singh. Lending their voice to this wonderful music are great singers like Padma Shri Anup Jalota, Javed Ali, Bela Shende, Bela Sulakhe, and Chetan Rana. The concert will be hosted by Manoj Muntashir, supported by PR Partner Dwapar Promoters. In this feature, we are in conversation with the music conductor of the show Shri Uttam Singh. 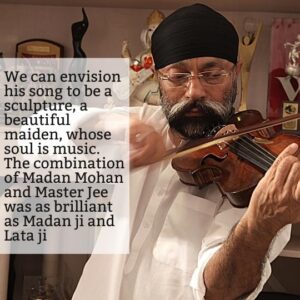 Lata Ji considered him the “Badshah of Ghazals”. You have also been a part of his musical journey. It’s been about 50 long years now. Am sure during conducting Ek Mutthi Asmaan, you would have surely been reminiscent of those wonderful musical years?

Mine has been a fantastic musical journey, which started in 1962, so now it’s been 60 long years in the industry. Naushad Sahab’s assistant was Mohd. Shafi, with whom I did my first recording. Madanji’s son, Sameer came to me around one and a half to two years back that he was keen on organizing this show and asked me to conduct the same and also play the violin. Now, as has been my association with Madan Ji, could not deny and agreed. Now, the concert is happening finally. Rehearsals are in full swing.

But one thing will surely want to mention is that Madan Ji was a total contrast to his soulful compositions. Soft from the inside and tough military man on the outside. Nobody dared speak in front of him. Well, will share anecdotes and sweet memories with him during the show.

Any moment spent with the veteran, which proved a turning point in your musical journey?

Yes, it was in 1962, my father sent a message to Madan Ji that “my son who is 14 years old plays the violin, could you give him some time to listen to him please?” After procuring an appointment, my father took me to Madan Sahab but I didn’t get a chance so we came back. We went on another day, still the same. And finally the third time, I got a chance. During those days he lived in Pedder Road. We went in and were ushered to a music room. I still remember that place. I opened the violin in front of him and played one polka – a piece of western classical music. I played that piece for about five minutes and all the while I was observing him. He too was all attention on me. After playing the polka, he just gestured to continue and I played one of his songs. I don’t remember which. He didn’t say a word after that and I packed my instrument and we came back. After a few weeks, I got a message to come for a recording. That was a great day for me. From that day till he passed away I was associated with him. Gradually my name started climbing on the list and eventually I occupied the top position. Violinists were anyway rated high in any music director’s list those days but unfortunately have been replaced by keyboards now.

How has your experience of working with Madan Mohan Ji been?

It was just fantastic. I distinctly remember his way of walking, talking, sitting, and working. Forgetting him would be putting music to oblivion for Madan Mohan means Master of Music.

As an arranger yourself, what do you feel was special about his composed songs and ghazals?

He composed only tunes. His music arranger was Master Sonik (popularly referred to as Master Jee). So, Madan Ji’s main films, ghazals, etc. have been done by Masterjee. We can envision his song to be a sculpture, a beautiful maiden, whose soul is music. The combination of Madan Mohan and Master Jee was as brilliant as Madan Ji and Lata Ji. Many arrangers came afterward but none could match this association.

What message would you want to give the next generation through Ek Mutthi Asmaan?

A very good question cos it is not only a show but a Class and Institute for listeners. Whatever we will play, sing or narrate incidents that evening, will have a class of their own. So, anybody who is musical or a huge fan of Madan Ji, will not deprive himself of being a part of this extravagant show.

This was a candid talk with Uttam Ji about the concert. Excitement seems to be at its peak for this not to be missed show. Book your tickets now, before it goes late.